Have you ever wanted to run multiple studies simultaneously  and make sure that each worker only takes a single study? On MTurk, there is no simple way to block workers who completed one study from accepting and completing another study being run at the same time….until now.

(Note: TurkPrime’s exclude feature excludes workers who have completed one study from taking another subsequent study, but not if both studies are being run at the same time.)

The TurkPrime Survey Group (arriving August 25, 2016) feature allows a you to assign multiple studies to a survey group. Then, any worker who accepts a study in that group will be disqualified from accepting other studies in that group. Using this tool, your studies will be guaranteed to have a mutually exclusive group of respondents. 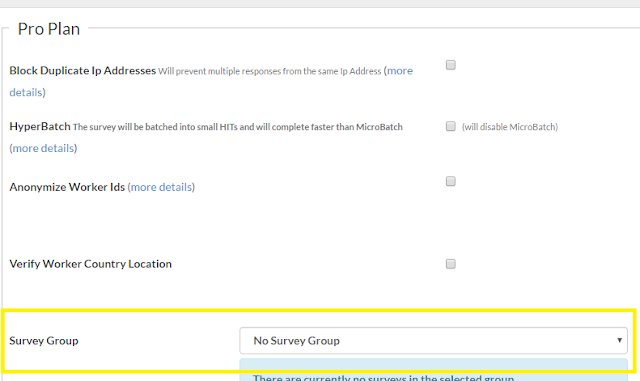 The Survey Group option is also a broader exclusion criteria than the standard Exclude Worker option. While the standard Exclude Worker option excludes workers who have accepted and completed your study, the Survey Group feature excludes any worker who accepts a HIT from one of your studies even if they do not complete the study (e.g., the worker quits halfway through or completes the study but has a technical glitch that prevents them from submitting the HIT).

Run Panel Studies on your own Requester account to limit your workers to specific demographics (e.g. Female, over 25, Liberal)!