In 2020, the Covid-19 pandemic initiated an unprecedented shift in the American workforce. In a matter of weeks a significant portion of the labor force shifted to working online, a change likely to remain in place for the foreseeable future. Although many of these workers are continuing to perform their pre-pandemic jobs from home, an ever-expanding number are participants in the gig-economy.

With this transition there is an opportunity to disrupt many of the biases that plague traditional workplaces, leading to more equitable employment practices. One of the most enduring and damaging biases that could be addressed in this transition is the gender pay gap.

Despite widespread awareness of this issue and many years of research, women still earn approximately 80% of what men with similar positions are paid. This gender-based pay gap has profound impacts on society, and its negative consequences disproportionately fall on lower income families as women pay the lion share of the bills for the neediest households in America. There are multiple explanations for the existence of the pay gap ranging from human capital factors to outright discrimination, and its enduring nature has led to an expectation of unfair treatment at the societal level. This expectation can have measurable impacts on behavior, which directly translate to continued economic injustice.

We have an opportunity during this time of transition to address these unjust practices, which would have important down-stream impacts on the welfare of the US workforce.

The Four Factors Behind the Gender Pay Gap

The gender pay gap has been studied by economists and social scientists for decades. Historically, the challenge has been to try to isolate the various forces that contribute to the gap in traditional work settings. The factors that have been explored can be broken down into four categories:

With the recent emergence of the gig economy comes a novel opportunity to explore the mechanisms driving the inequality differential. Gig jobs often lack many of the structural and interpersonal elements that have been previously identified as contributors to the gap. As a result, these jobs should offer opportunities for greater pay equality when compared with the traditional labor market.

In many gig economy jobs workers act remotely, set their own schedules, and determine the number of hours they wish to work. Further, compensation, as well as parameters for recruitment, selection, and promotion in these settings are typically pre-established and do not rely on interactions between workers and employers. But the most groundbreaking difference between traditional work and some gig-economy jobs is anonymity – where a worker’s identity and gender is unknown to the employer.

Given these structural differences in the workplace, one might expect that the gender pay gap would disappear. Unfortunately, research shows this not to be the case. Studies show that male Uber drivers earn more than females ones, as do male sellers on anonymous sites like Ebay. Our team, powered by CloudResearch.com, previously conducted research on gender-based pay on microtask platforms.

These workspaces allow workers to select short-term projects often only minutes in length, and provide compensation information up front. In this environment none of the structural factors that typically contribute to a gender pay gap exist, and discrimination in any form is not possible as worker gender is masked for the employer.

Despite these factors, we observed a pervasive gap in hourly pay rates between men and women, which is primarily explained by women on average choosing lower paying tasks. Are forces from the traditional workplace being carried over into these new gender-blind economies? Why do women end up selecting tasks with lower pay?

Why Does a Gender Pay Gap Persist for Anonymous Workers?

In our latest paper, entitled, “New job economies and old pay gaps: Pay expectations explain the gender pay gap in gender-blind workplaces,” we explored this question by measuring workers’ pay expectations and actual earnings on the MTurk microtask platform. Here we employed an economics concept known as reservation wage. A reservation wage is the least amount of money someone would accept to perform a job, and studies have shown that historically, men have higher reservation wages than women.

We surveyed a sample of 11,308 microtask workers (46% female) and inquired about their minimum acceptable hourly wage for a theoretical full-time job. As expected, women consistently reported lower acceptable wages. We then followed these workers over the subsequent weeks, measuring their earnings on the platform as they completed approximately 6 million tasks on the platform.

We modeled the pathway leading from gender to earnings on microtask platforms using a statistical technique called serial mediation. The model we tested is shown in the figure below, and indicates not only how gender predicts earnings both in the traditional and on gender-blind online workplaces, but how pay expectations play a causal role. 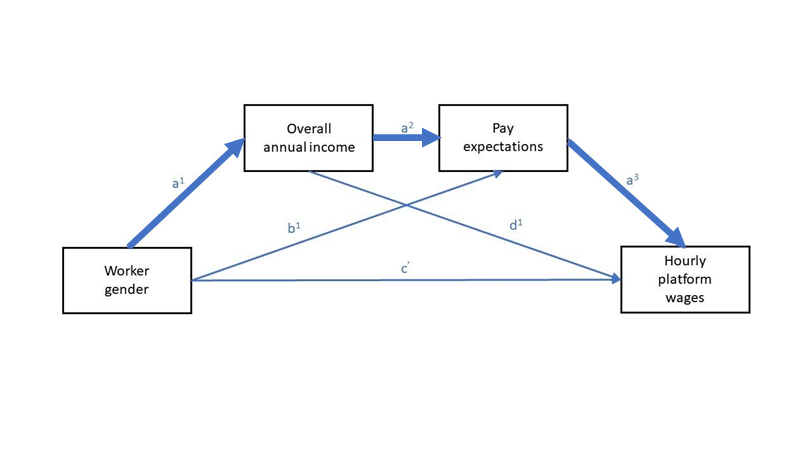 The inequality present in traditional workplaces appears to have carried forward into the developing online economy through women’s lowered pay expectations, which themselves result from prior unequal treatment. But now that we understand this mechanism, what can we do to change the course of this continued inequality, especially while the gig economy rapidly expands?

What Can Employers Do to Address Pay Inequality?

Luckily, we have the unprecedented opportunity to directly explore potential solutions.

For instance, could a well-designed informational intervention which educated women on how their choices affected their microtask earnings reduce the gender pay gap for the workers? What about an intervention focused on the social and psychological factors linked to womens’ perception of self-worth?

CloudResearch’s platform gives us the ability to rapidly perform randomized studies of potential interventions in search of evidence. We can expose a portion of women microtask workers to one of these interventions and then follow their compensation over the succeeding weeks.

This ability to intervene and then observe real-world earnings positions us to definitively determine which interventions are most impactful in this setting, while providing insight into the forces maintaining the gender pay gap in other work environments. Successful intervention programs could be provided to women participating in the larger online workforce, helping to drive gender pay equity.

We have an opportunity to dig into the issue of pay expectations and their influence on the gender pay gap. This understanding can help us correct long-standing issues that have persisted in the labor force. The gender pay gap has proven to be enduring – and its impact on the welfare of families has been immense. During this critical moment of change as entire sectors of the economy shift into virtual settings, there is an opportunity to intervene before new platforms and work spaces become entirely entrenched in old problems.